I have always believed that the relationship between a director and talent/ actors is undoubtedly unique. Having never been on the receiving end of acting directions, I had never really put too much thought into how one interprets what is being asked of them. Based on previous workshops and projects that I have undertaken, I did have some preconceived notions regarding the way in which a director communicates with their subjects. Throughout my studies, there is one director whose approach really stuck with me and helped me to understand just how important this relationship is, and that is Peter Weir in the production of his film, Dead Poets Society. Through interviews with the cast and crew members, it was made very clear that it was Weir’s connection with the actors which empowered the success of their performances. In addition to such researches, I also come into this masterclass with the knowledge of action verbs and beats which was taught during Studio 1 and recapped leading up to this class. From these various sources of information, I feel that the best performances are achieved when the director knows every detail of the story and is able to direct the actors in a way that is relatable to their own experiences and/or life events. Furthermore, there needs to be a level of understanding and trust between the two parties as a director will need to tailor their approach depending on the actor and/or scenario. Prior to this workshop, the importance of a director’s ability to identify and understand beats within a script was apparent to me though only to a limited extent. I thought that a scene and/or characters objectives and motivations were superior to the story, emotional and character beats in terms of directing a successful performance from an actor. I formed this assumption base on the script analysis process which we have previously used to determine the motives and objectives that drive a particular scene or character. I did not realise how these three elements could all be used simultaneously in the productions process, rather than separating them- i.e. The script analysis undertaken in preproduction is solely for the purpose of identifying the beats to determine motives and objectives, and only the motives and objectives are taken for direction in the filming process. With this said, I think it is clear the importance I placed on directors understanding of objectives and character motivation. In preparation for this workshop, I focus motives and objectives in relation to the list of action verbs provided and the given script, not so much the beats. In that sense, I suppose I wasn’t as prepared as I could have been.

Having now experienced the workshop and gaining a greater insight from both the stand point of a director and an actor, I can see just how imperative it is for a director to be able to understand and use beats, objective and character motivation concurrently. I have since realised that the idea of any one of these elements being ‘forgotten’ about in the actual directing of actors within production is misguided. This was a significant ‘lightbulb’ moment I had during the workshop when the objectives and motivation of my scenario were changed, and I had to identify different beats on the spot. Identifying the somewhat new beats dramatically changed the result of the scene I was directing. Hence, any changes to these key elements have a domino, or flow on, effect. 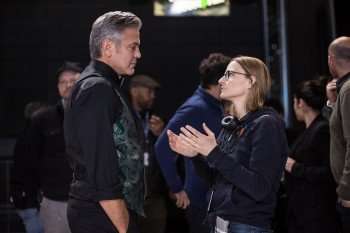 When reflecting on this masterclass, I think the biggest challenge I faced was my scepticism of the process and my anxiety toward the thought of having to “act” in front of my peers. However, in biting the bullet and giving it a go, I was able to see firsthand why it is an absolute must for the director to know exactly what they want from a scene, the ins and outs of the script and have a mutual understanding of the story and character with the actor. I found that, in a few of the scenes I was in, I had to ask a number of questions as the director was either unclear or unconfident with the directions that they had given.

In my own experience as the director in this workshop, there is one specific criticism that I gave myself, which I believe the facilitator also picked up on. I noticed that I put so much thought into the scenario I was going to create and the action verbs that I was going to give my actors that when they performed the scene how I wanted the first time, I didn’t have any variations up my sleeve. Looking back on the very little directing experience that I have had, I can now see where my approaches had faults. These are predominantly due to the way I communicated with the actors and the words that I used. Rather than giving action verbs, I was giving result actions/ direction- telling, or even showing, the actors what I want from them.

In Future, this knowledge, criticism and challenge, will be in the back of my mind when I am directing or even just working with an actor. Next time I am given such opportunities, I am going to pay greater attention to the way in which I communicate with the actors, using action verbs rather than result action/ directions, and ensuring I have a firm understanding of the character, emotion and story beats. A key tip that will assist me in correcting these things that I learnt and found most useful from this whole masterclass experience is to always have a “what if” or “as if” in mind. These hypotheticals will provide the actor with more direction without being told or shown exactly what to do. This approach makes for a more natural and successful performance.